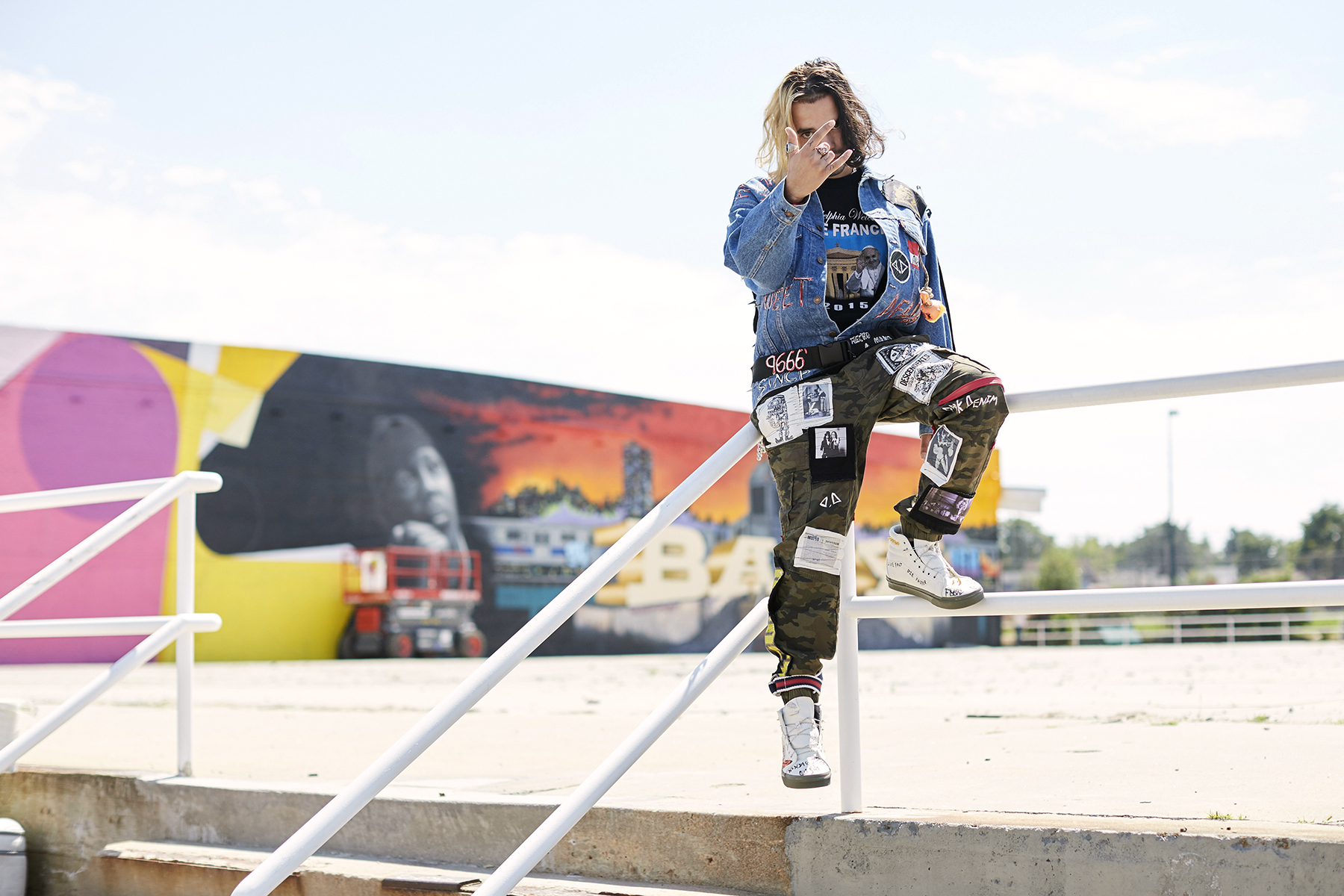 AldoElCreator, designer of Dark Denim, started his career in Denver. Now based in LA, his brand has exploded. Currently, he is styling celebrities and forming partnerships with various influencers worldwide. For the upcoming Denver Fashion Week, presented by The Green Solution and Medicine Man, Night 1 Ready to Wear runway show on November 18, AldoElCreator will return to Denver to showcase his new collection that he has created just for the event.

Purchase Tickets for the Event 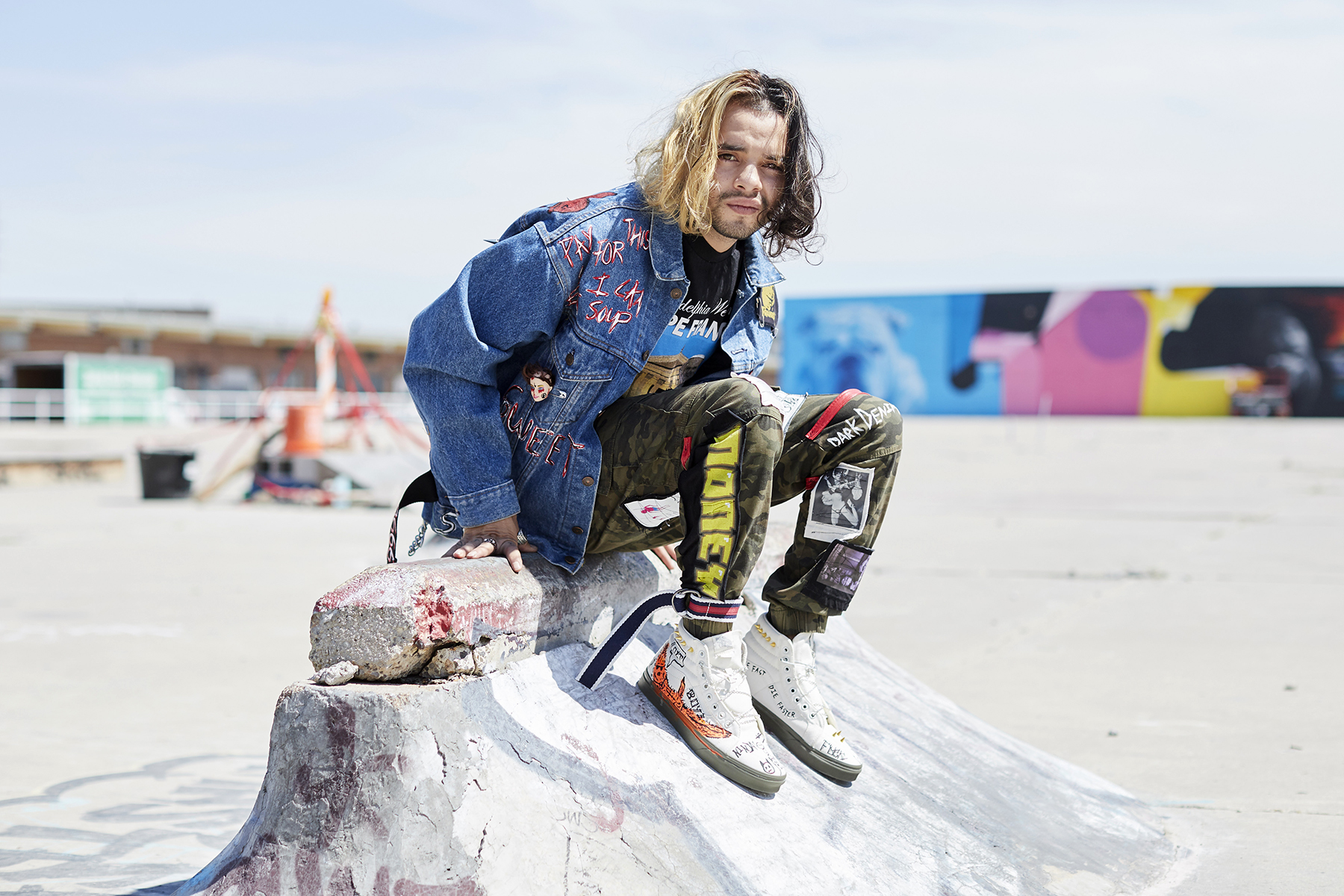 Eight years ago, AldoElCreator picked up a sewing machine and began his fashion journey. What started in Denver has grown into an international brand. As a self-taught designer, he gained valuable experience working in sweatshops that he feels has set him apart from others in the industry.

“I’m self-taught, so everything I just learned off of Youtube and trial and error,” he said in an interview with 303 Magazine. “I ended up building my own company and now I have a fashion house in the middle of LA, downtown.”

AldoElCreator has been focusing on elevating the collection that he is bringing to DFW. Attendees can expect to see garments that fall under the ready-to-wear and street couture categories, but that are outside of the box in terms of execution.

Living in LA has opened up AldoElCreator’s eyes in terms of fashion. On days when the weather seems warm for some, the streets are filled with jackets, layers and an abundance of different styles. Everyone has their own unique take on fashion, which has translated into his designs. 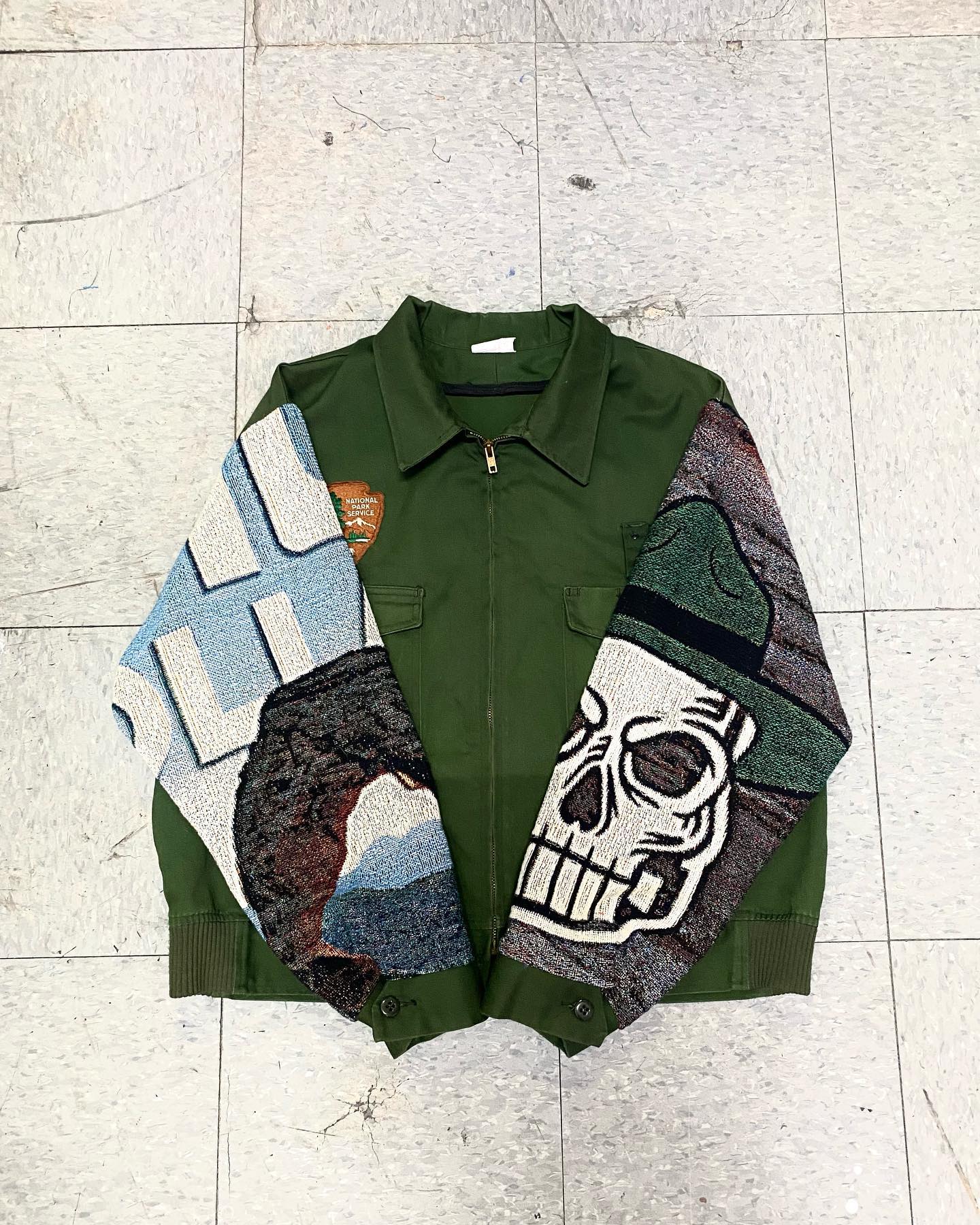 One of AldoElCreator’s new designs

Therefore, in terms of inspiration, “I’ve been inspired a lot by the streets of Los Angeles … I mean like by the people here,” he said. “It’s very international, so there’s just various styles in the way people dress … so that’s pretty much what I’m bringing, I’m bringing more of like what you would see on the street on your Sunday.”

Dark Denim is known for its modern grunge aesthetic and couture designs that bring streetwear to an entirely new level. As for AldoElCreator’s reputation in the fashion world, organized chaos defines his process and overall products.

“We work with some of the biggest artists in the world, it’s pretty cool,” he said. “It’s mind-blowing because I didn’t think that fashion would take me this far, but it has.” 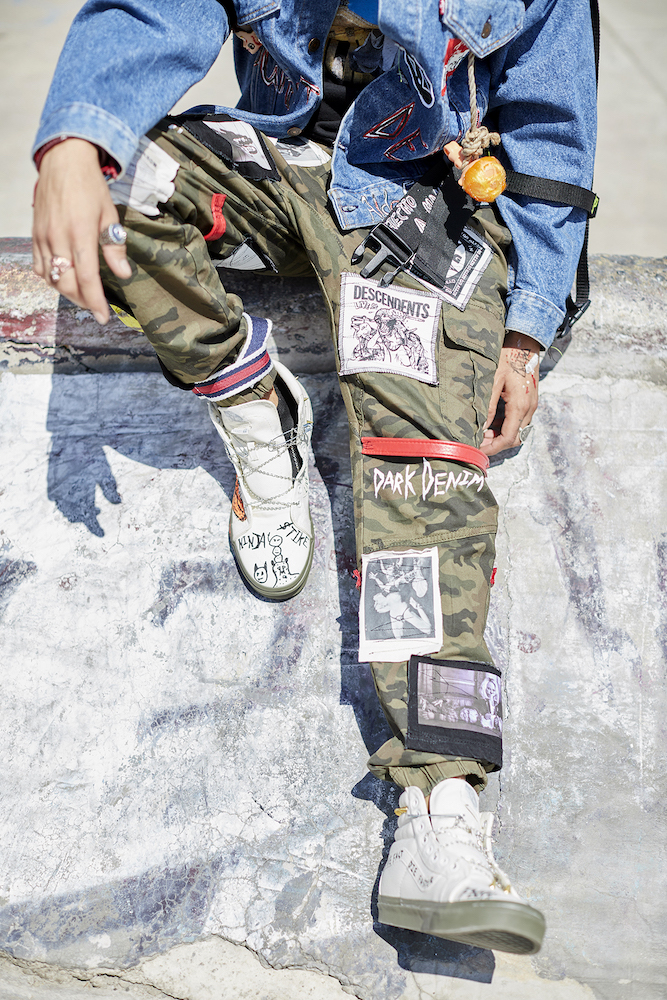 Dark Denim is unique in the way that the brand is funded and how AldoElCreator gives back to the community. The fashion house was funded through cryptocurrency, a form of digital currency that allows users to trade and sell services online. For AldoElCreator, crypto has been a defining aspect of his brand and he aims to incorporate it in some way in the collection that he brings to DFW.

AldoElCreator also gives back through his work by volunteering for local nonprofits. Once a month, he devotes his time to cook and gather supplies to create care packages for the homeless community of Los Angeles. This is one of the most rewarding aspects of AldoElCreator’s work.

“If it wasn’t for the people, my brand wouldn’t really be here,” he said. “So I tend to really give back to the community once I have a big event, or I have a collection or you know, I have like a deal go through, I tend to take that money and just pay it forward.” 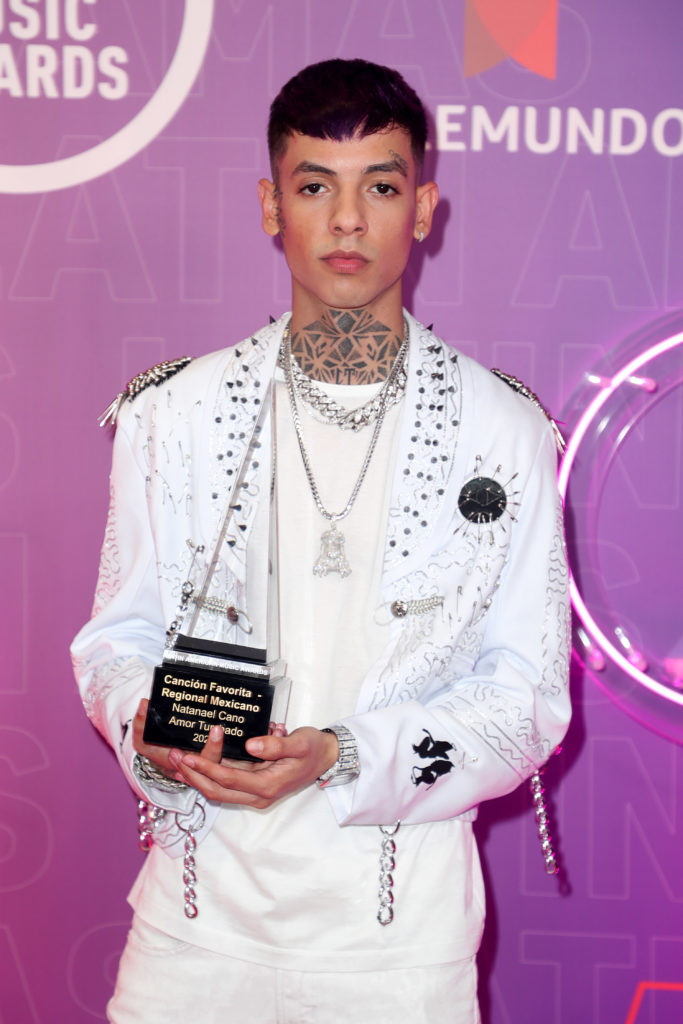 AldoElCreator’s work is vast, as he has experience working with a multitude of well-known companies and artists. Recently, he has styled Natanael Cano, one of Mexico’s young and rising artists. Cano was nominated for Regional Mexican Artist of the Year, and he attended the event wearing a piece created by AldoElCreator.

The look for Cano embodied a traditional Mexican Mariachi outfit, but with a twist. “I Mad-Maxed it in my own way, so I like just twisted it,” he said. Through this outfit, Cano met a variety of celebrities like Bad Bunny, elevating AldoElCreator’s image and reputation in the process.

In terms of returning to DFW this season, AldoElCreator is looking forward to bringing his A-game. 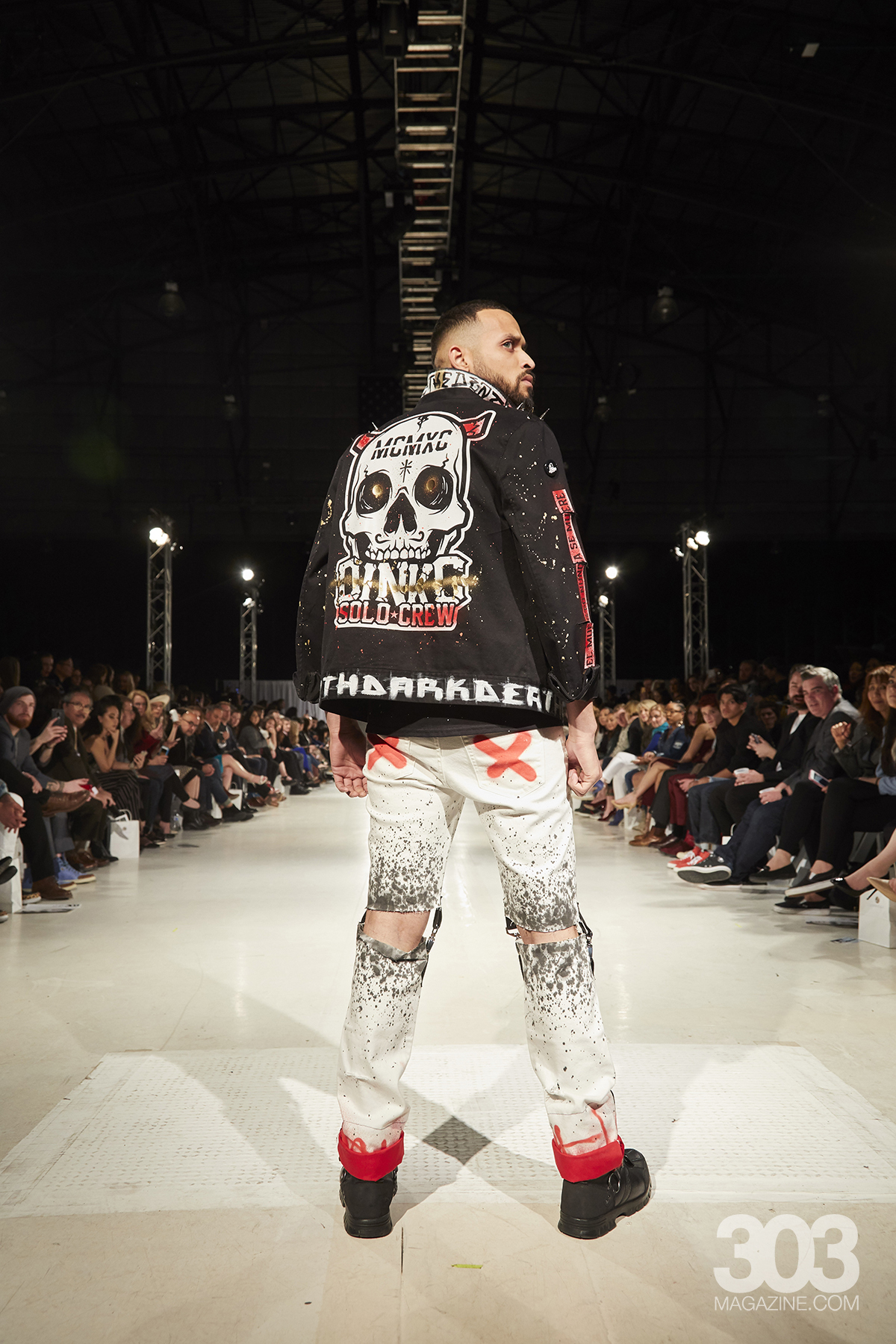 “Honestly, I just look forward to seeing everyone have fun and mostly I look forward to shutting the place down, it’s what I’m known for,” he said. “I’m not competing with anyone but myself so that’s what I’m looking forward to is just like shutting it down … and just feeling good about it at the end of the day that I did it.”