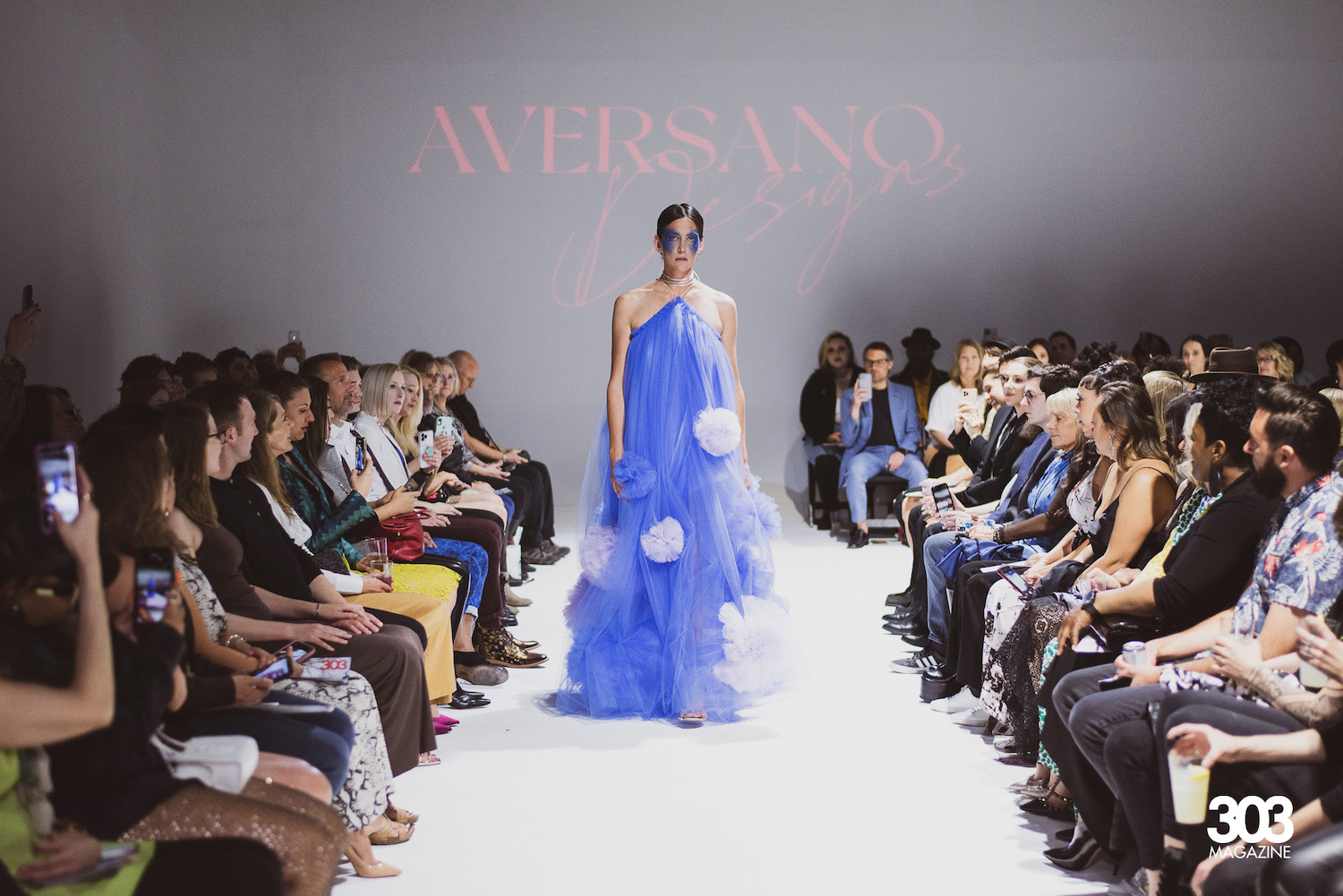 In the quaint setting of Void Studios, the DFW promotional video came to life on the walls surrounding the audience. The extravagant gowns traveled from the screen to the runway right before the crowd’s eyes.

Designer Cora Aversano of Aversano Designs brought a collection defined by the beauty of the female body. From subtle colored tones to bold neon hues, the layered tulle gowns glided across the runway. 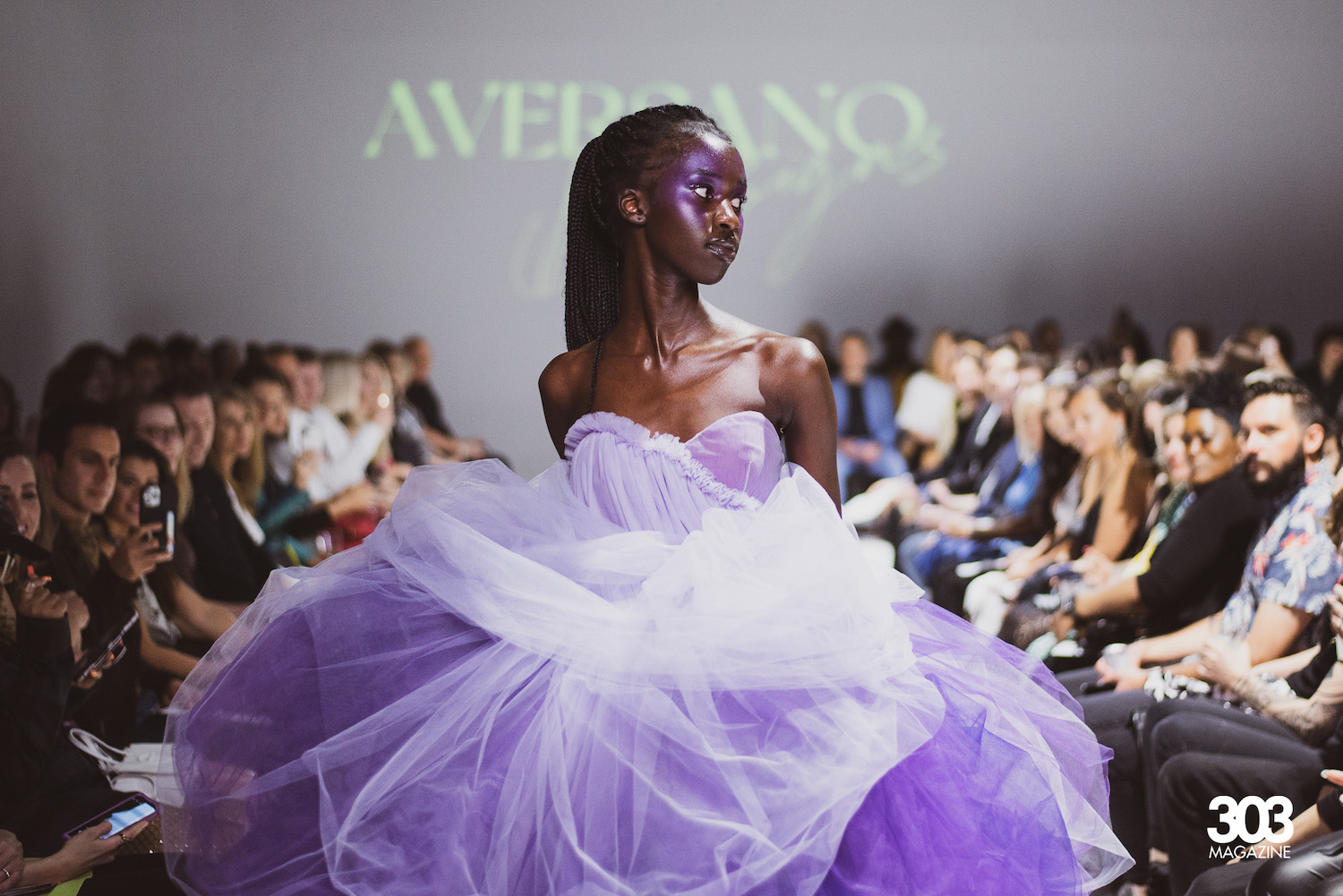 The looks were completed with makeup to match the color of the gowns. To the tune of “I Am Woman” by Emmy Meli, Aversano transformed the DFW stage into a scene that made a statement.

This collection left attendees feeling inspired and in awe. The premise is clear: Denver fashion is much more than what meets the eye.

As a DFW veteran, Rachel Marie Hurst has made a name for herself in the local fashion scene. However, this collection was unlike anything we have seen from her before. The looks were innovative, inspiring and dimensional. 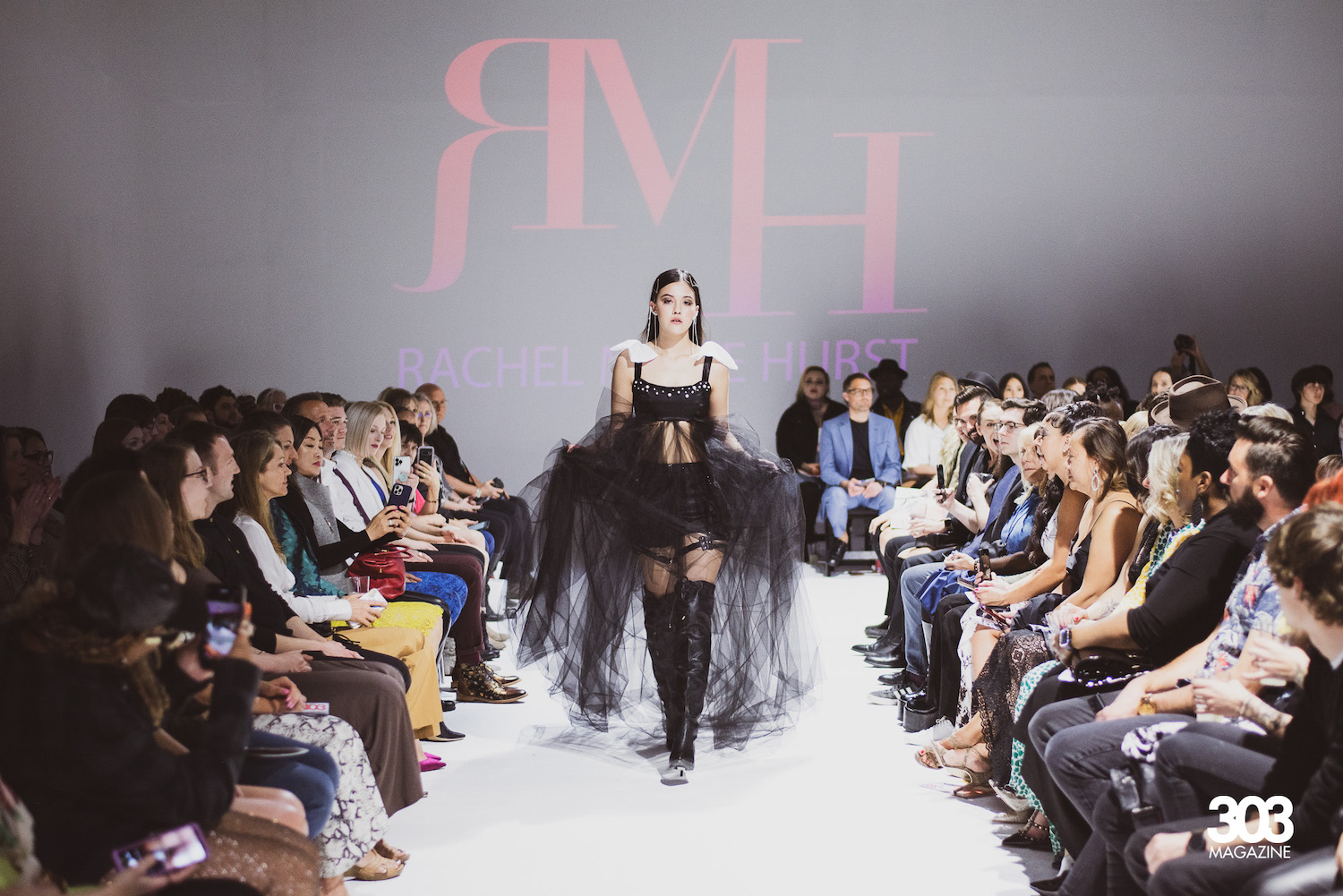 Hurst’s collection was built upon accessorizing in a variety of ways. From pearl embellishments to bows, belts, earrings and more, the looks were both elegant yet sexy and striking. Each garment was either a soft blue, a bold cobalt or a simple black and white. The result was a cohesive collection that progressed throughout the segment, yet each look was incredibly different from the last.

Detail took the forefront in Hurst’s DFW show. The audience was drawn to every single aspect of each look. It was almost like you couldn’t get enough.

This magnificent take on bridal couture was timeless, vintage and chic. Designer Zeljka Sladovic elevated the DFW stage with incredibly detailed gowns. The looks exuded shapes and materials deriving from Croatian culture as an ode to Sladovic’s heritage. 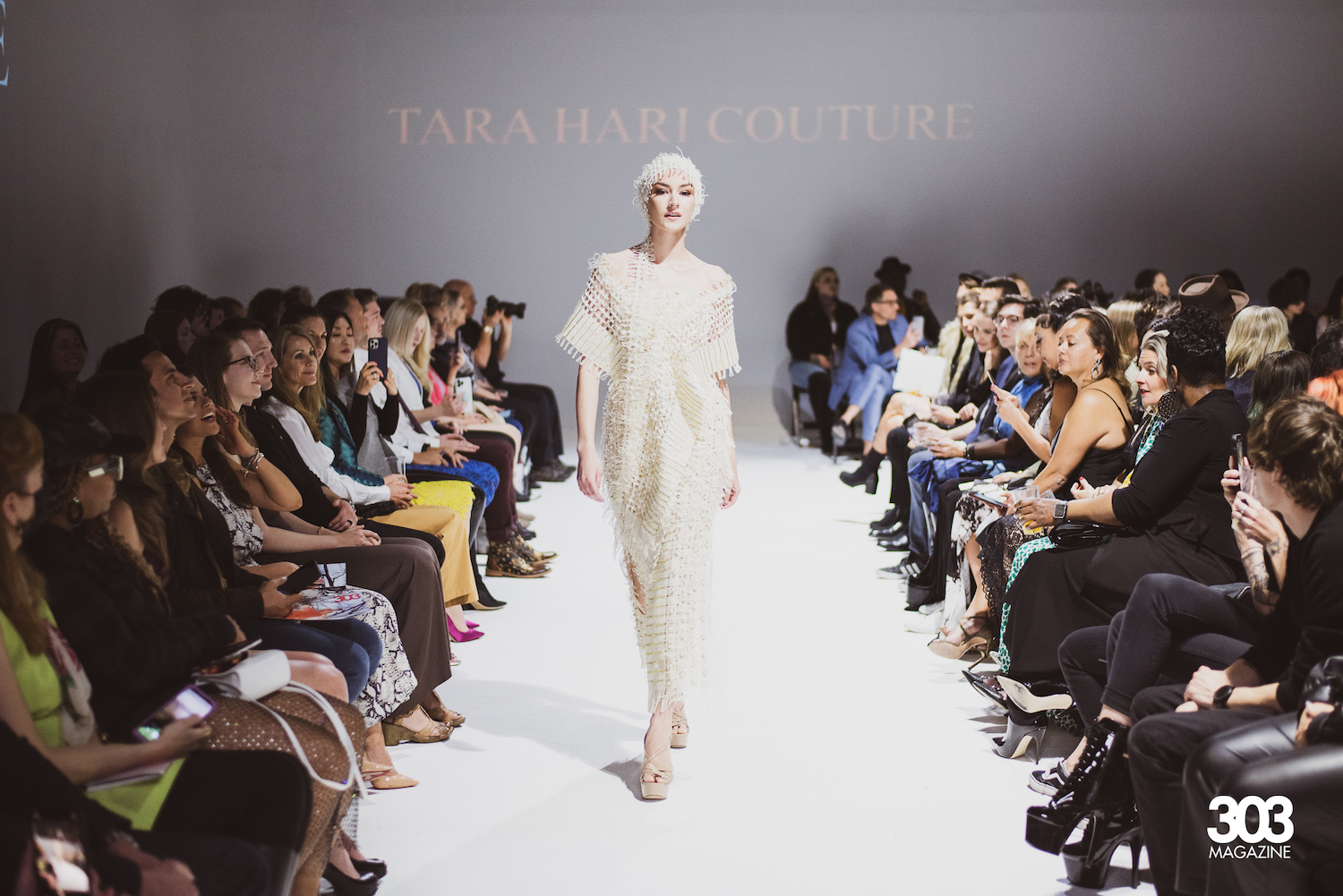 Burlap fabric was transformed with elegant accessories and beading. The result was a delicately designed collection that brought the runway to life. These looks could have been in a museum, yet they captured the ultimate display of femininity.

Followed by a look featuring bridal pants and a cape, Sladovic joined model Trinity Thomas on the runway for a heartfelt moment where Thomas bowed down to the incredible designer that captivated the audience on such an intimate night of DFW.

It’s not often that writers are at a loss for words. However, this runway segment left us speechless. 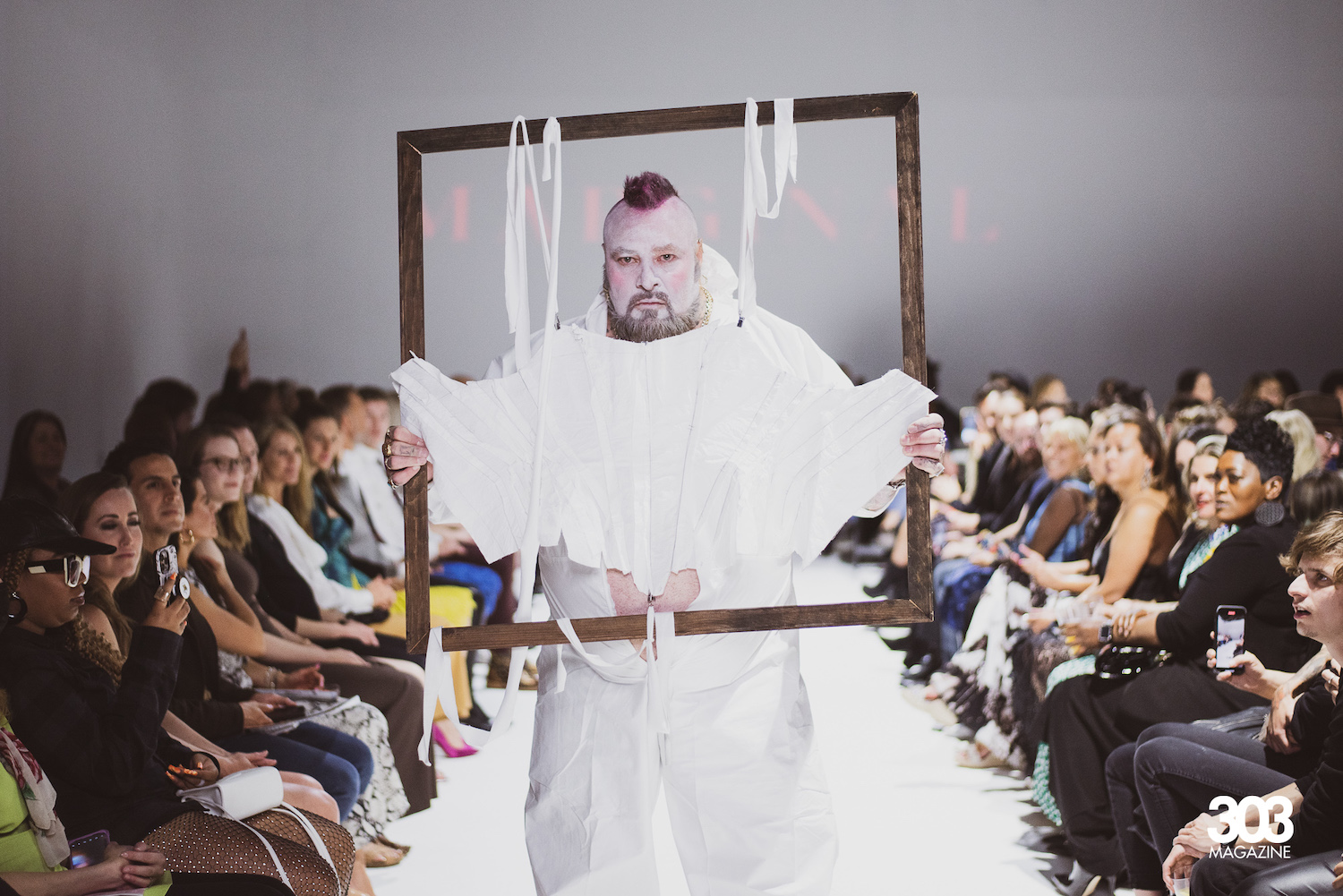 We never could have expected the collection that designer Matilda Marginal brought to the DFW stage. Dark music was accompanied by male models wearing what could be interpreted as either hazmat suits or onesies worn in a psychiatric hospital. With their faces painted white, the models marched across the runway carrying wooden boards displaying white fabrics and shapes. The scene is difficult to describe as it was so vivid and captivating that it wasn’t easy to comprehend in that very moment.

But that’s the power of fashion.

Marginal managed to use runway fashion as a way to create emotion for the audience. While the collection was unconventional, it was art in the purest form.

Marginal’s inspiration for the collection was a result of specific life experiences like reading “Ward Number Six” by Anton Chekhov and “One Flew Over The Cuckoo’s Nest” by Ken Kessey, as well as visiting a friend in a mental institution in Russia.

The models in this segment served as actors. Their cautious steps, distinct facial expressions, careful mannerisms and defined movements told the story that Marginal intended to tell. While it was terrifying, there was beauty within the collection that MARGINAL brought to Denver as well.

Every segment of Denver Fashion Week Night 4 was unique, yet they each worked harmoniously with the next. While a majority of the show celebrated femininity, MARGINAL’s strong closing was a stark contrast with extreme masculine tones.

This runway show was a turning point for both DFW and Denver fashion. The innovation and creativity presented left audience members with a fire in their stomachs, yearning for more.

Luckily, as for the fashion community in the Mile High City, it’s only up from here.

All photography by Roxanna Carrasco. Video by David Rossa.