What You Missed From The Inaugural Denver Fashion Week Spring 2018 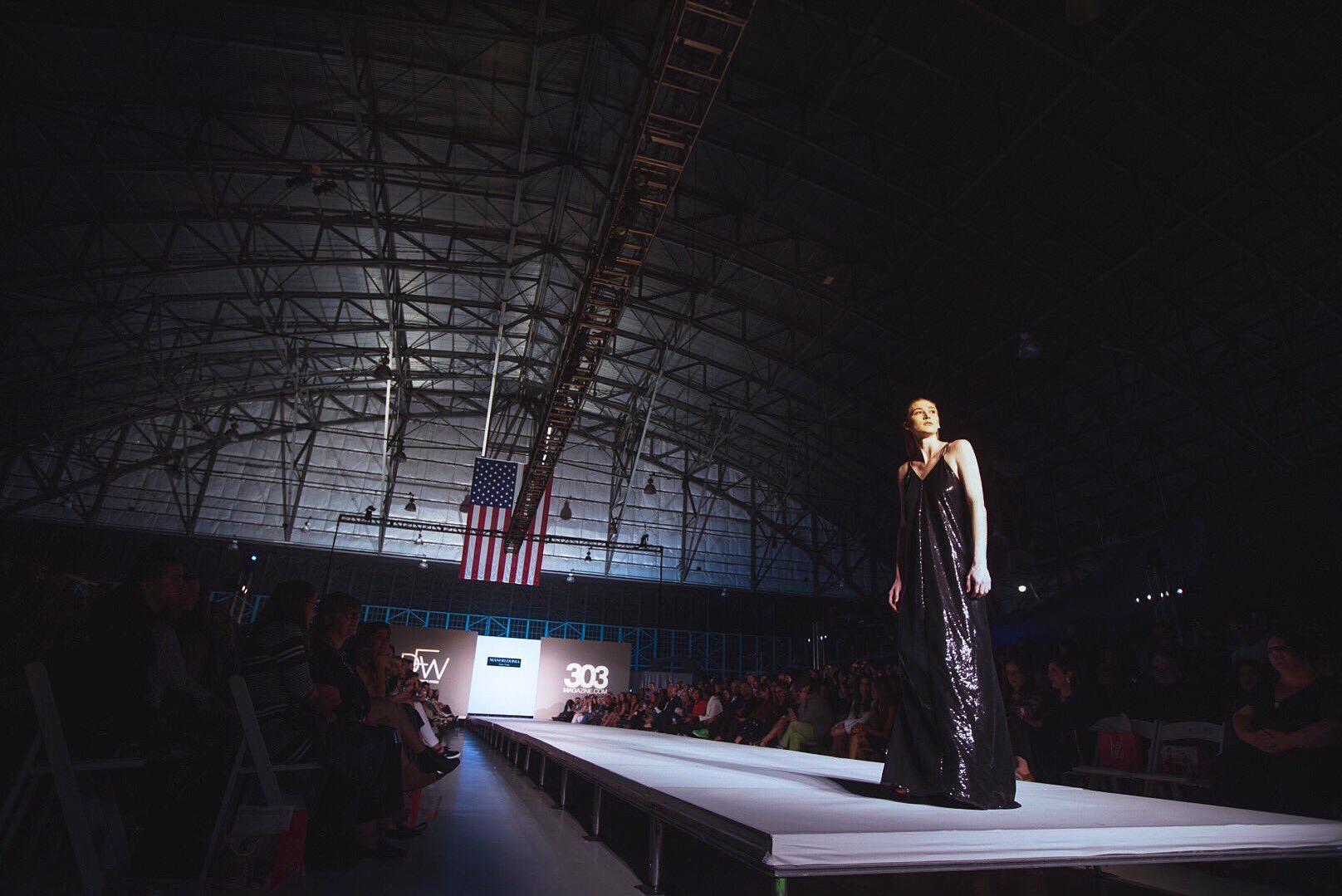 The first full Denver Fashion Week (DFW) brought sartorial splendor to the Mile High City in the form of workshops, industry parties and imaginative runway shows. Local and national designers celebrated beauty in its many forms at Wings Over the Rockies, while The ONE Paper Fashion Show’s artists turned simple matter into masterpieces at the Denver Center for Performing Arts. The result was a powerful message — Denver fashion has the power to break with convention and redefine glamour as a fluid concept. 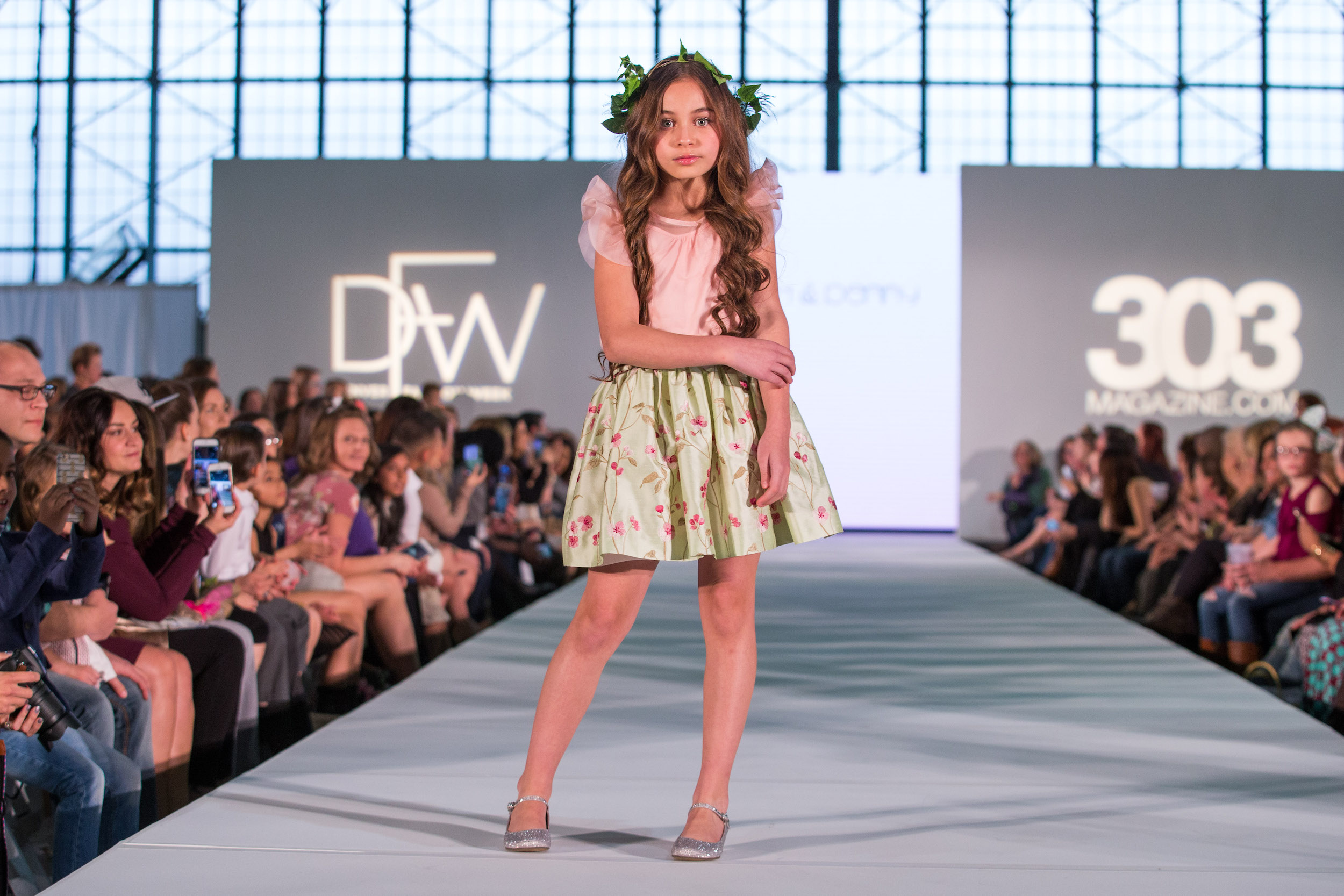 DFW kicked off with two new concepts for the event, including the first-ever DFW bridal-only show and the children’s fashion show. By day, kids of all ages presented a wide range of looks from designers like Dimple For Kids, couture handsewn dresses by Peach and Penny and prom dresses by The Secret Boutique. By night, designers took the wedding theme and reworked it DFW style. Femme Fatale Intimates started off the evening with unmentionables in shades of white. Nuorikko, another local brand, followed with its signature spin on wedding dresses — separates brides can mix and match to create their own unique looks for that special day. Denver Bespoke By Machete & Sons represented grooms with elaborate, satin smoking jackets and jewel-toned ascots with a hint of steampunk inspiration. Last but not least, Bloom brought us a floral show unlike any other. Models graced the runway in bustiers composed of rose petals, suit cuffs made of baby’s breath and orchid accents. The stage came alive with flowers and foliage, breathing new life into the traditional runway show.

Go here to see the full gallery for the Children’s Fashion Show and the Bridal Fashion show.

Go here to learn about our Monday, Tuesday and Wednesday workshops 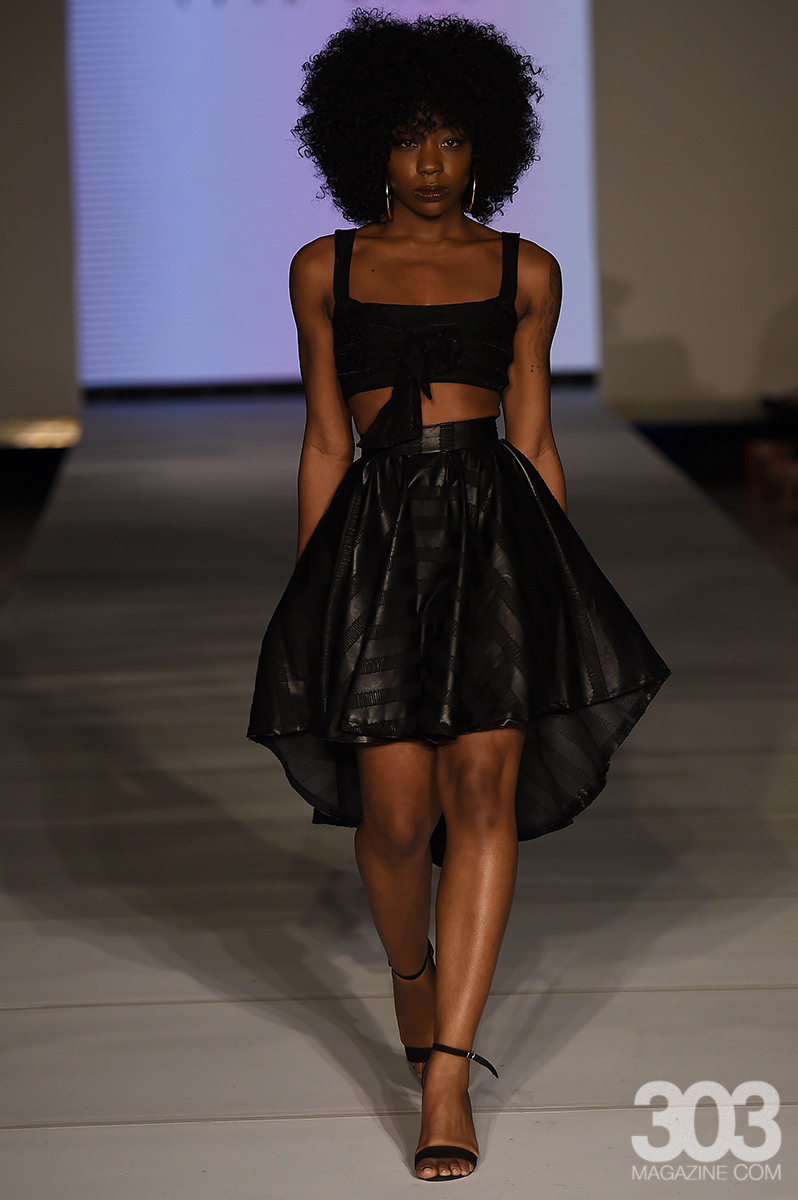 DENVER, CO – MARCH 22: Local Showcase and Alternative Models during Denver Fashion Week at Wings Over the Rockies on March 22, 2018 in Denver, Colorado. (Photo by Seth McConnell) 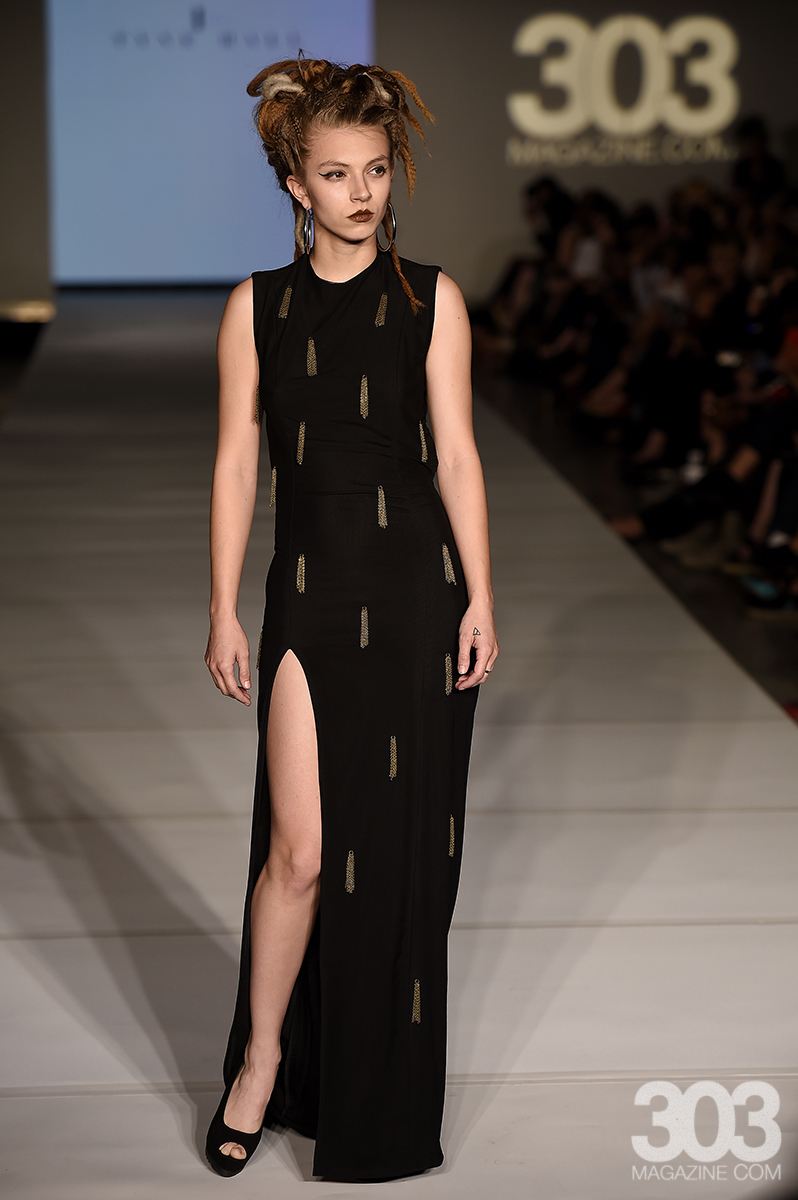 DENVER, CO – MARCH 22: Local Showcase and Alternative Models during Denver Fashion Week at Wings Over the Rockies on March 22, 2018 in Denver, Colorado. (Photo by Seth McConnell)

Starting at 7 p.m. with a red carpet reception, the event had an air of pageantry, inviting guests to become part of the magic that was about to unfold. The lineup of designers included Topping Designs, Tyne Hall, Rachel Marie Hurst, Steve Sells and Charlie Price, with an exclusive presentation by New York designer, Stevie Boi. Night Five was not only dedicated to local designers, but to non-traditional models as well. The show shattered pre-conceived notions of what would happen on the runway, and expanded the possibilities to include transgender, plus size and advanced style models.

Duane Topping began the evening with his tribute to femininity. “For me, there is a hardness and power to it,” he explained. “The love of something beautiful is what everyone goes back to for comfort and strength. It’s the curves of the body, the flow of the fabric and the way in which it walks.” Toppings designs included soft satin fabric, flowing pleats and a strategic use of color. Each of his transgender models commanded the runway in stark white or deep black with shocks of red, including that found on the bottoms of their Christian Louboutin heels.

Tyne Hall’s collection brought the heat of a woman scorned with a visual story about a Voodoo priestess seeking revenge. The sound system blared metal band, In This Moment’s “Oh Lord” and “Half God Half Devil” as models dominated the runway in fierce black fabric, backless dresses, short skirts and thigh-high, zip-up boots. Rachel Marie Hurst’s first plus-size line of polka dot patterns, mixed prints and playful culottes balanced the drama Hall brought. Steve Sells ethereal, galactic designs for mature women brought the crowd to new heights. Stevie Boi closed night five with a tribute to the color pink. Boi showed the edgy side of bubblegum with accessories like a backpack giving the middle finger, and he rallied against gender normativity, suiting both men and women head-to-toe in traditionally feminine shades. 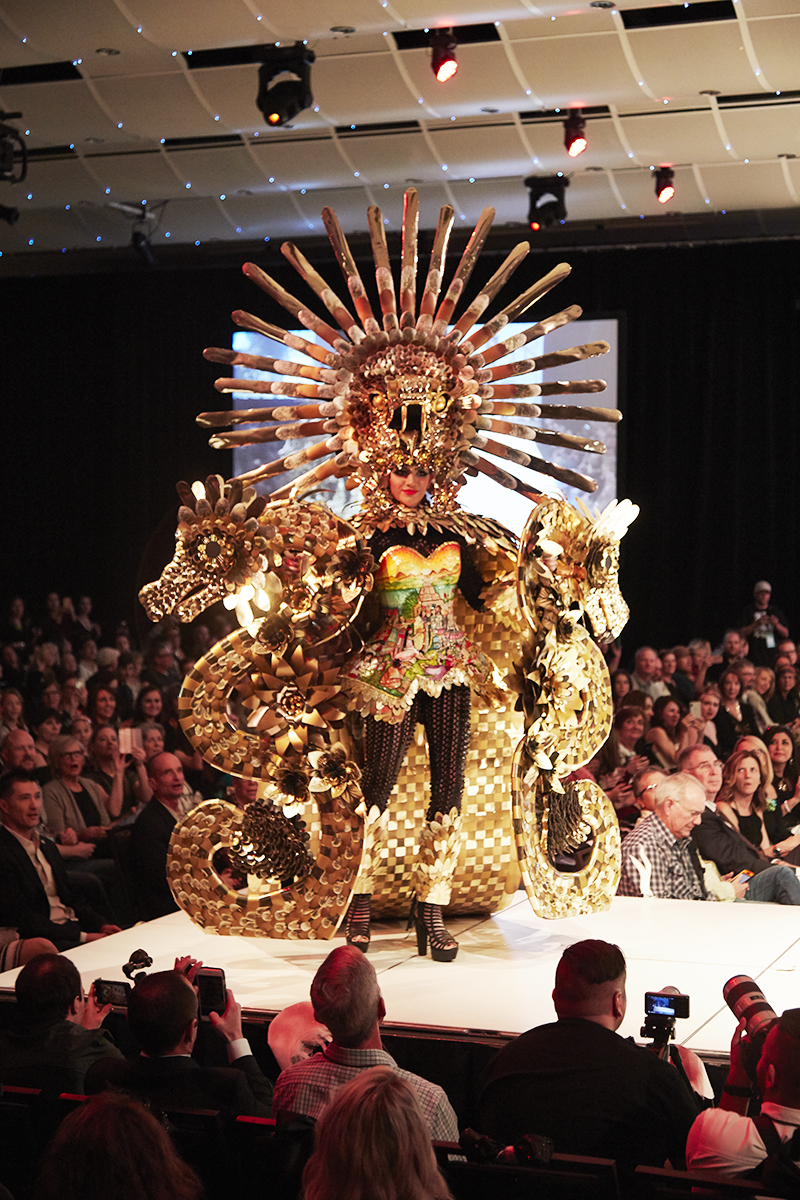 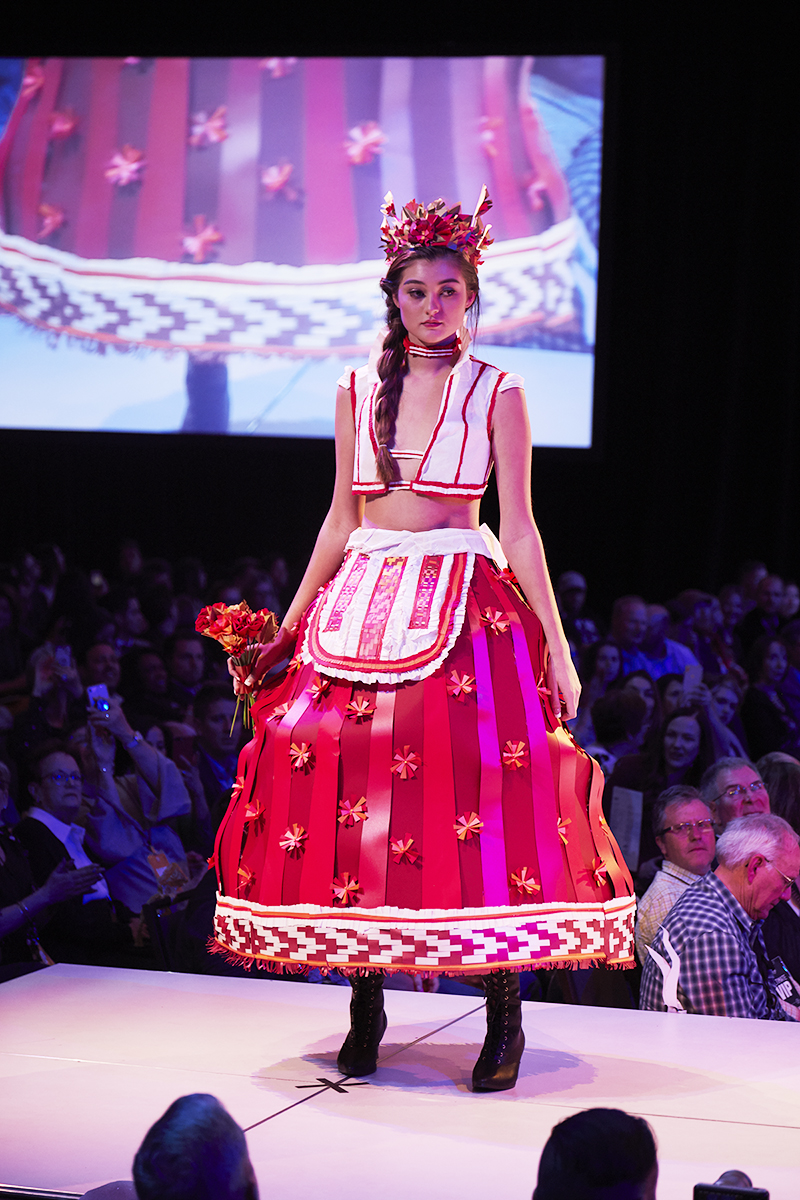 Denver celebrated The ONE Paper Fashion Show’s 14th year on Friday. Guests viewed more than 30 looks made almost entirely out of a simple art medium. Partial proceeds from the show benefit Downtown Aurora Visual Arts, an organization that combines art and technology that emphasizes innovation, problem-solving and community connections for at-risk youth. The awe-inspiring designs included Aztec Princess by Beto’s Hair Studio, a look inspired by the Spanish conquest of the Aztec empire in Mexico in 1521. The gilded, hand-painted design towered above the crowd, and delighted the esteemed panel of judges, earning the salon a first place win. Stay tuned for our full review of the Paper Fashion Show. 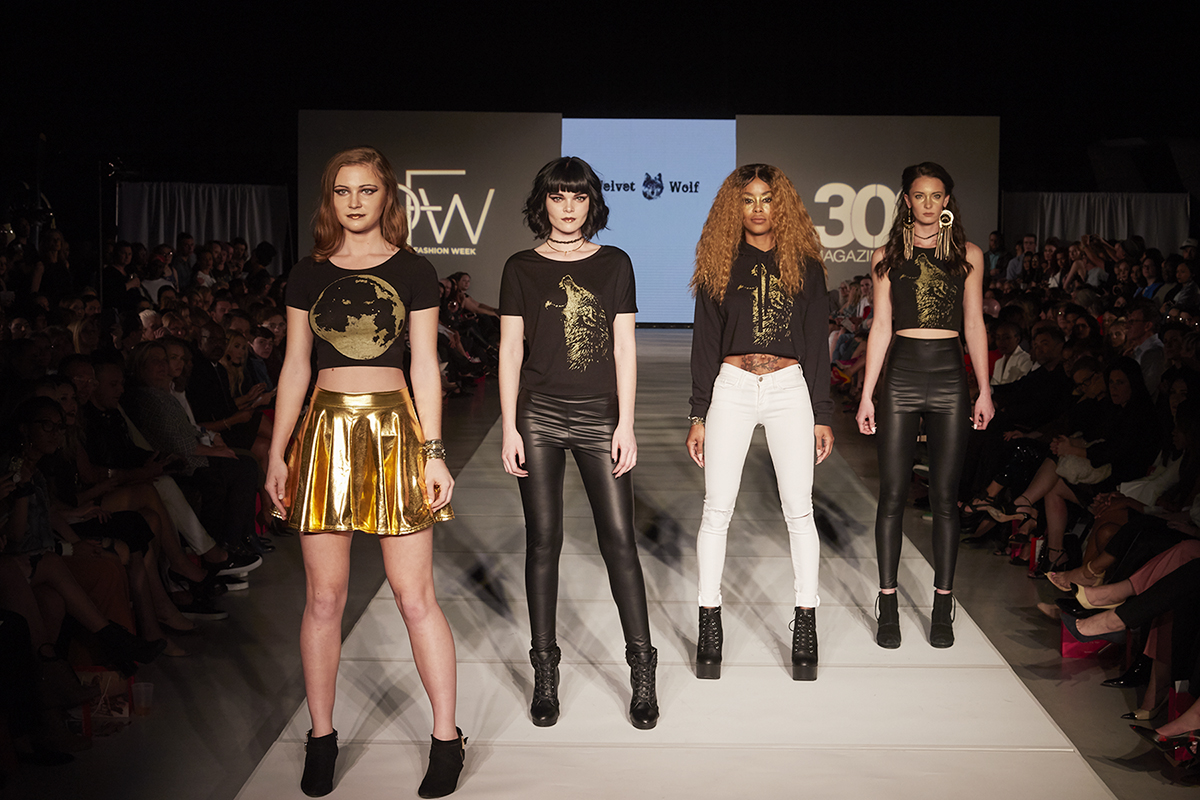 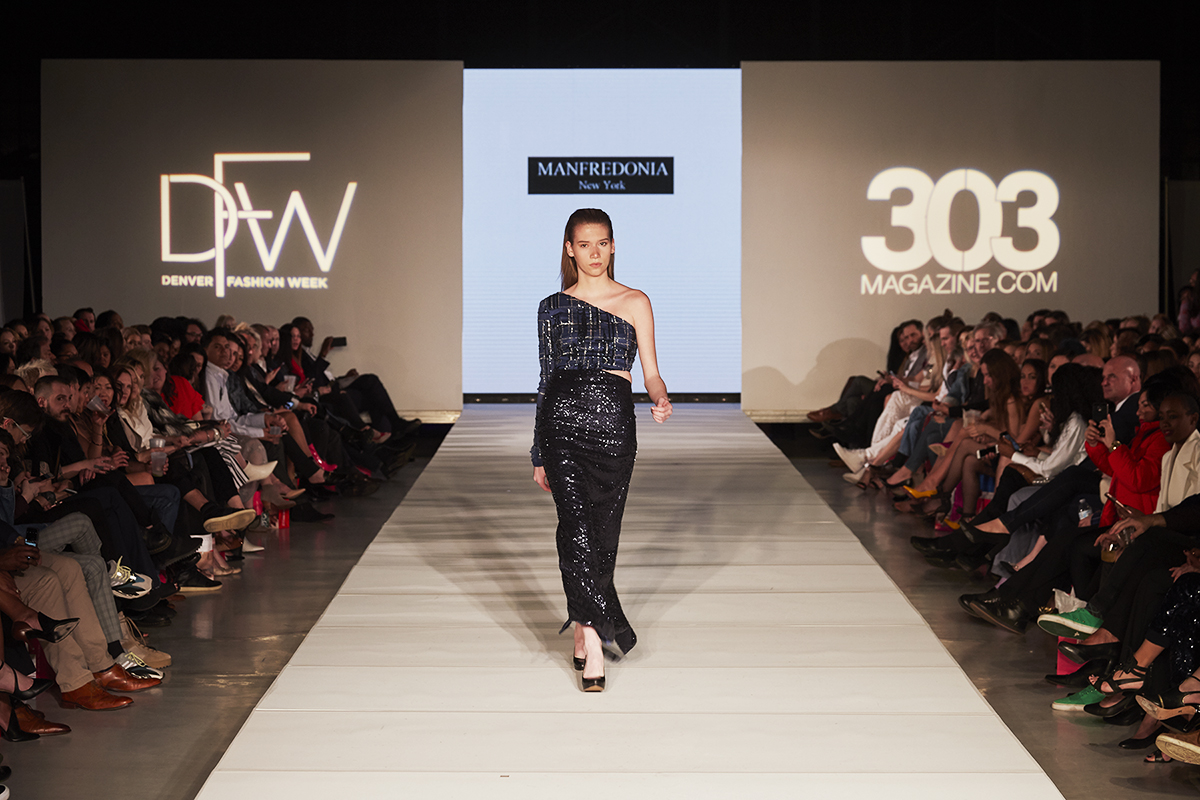 Day Seven brought national designers to the DFW catwalk. Velvet Wolf started the event with a perfectly choreographed segment. Cypress Hill’s “Superstar” created an urban mood, as models strutted in tight, black leather pants; high-waisted, gold shorts and cropped sweatshirts. “We worked with a designer who handmade these custom looks for us for the show,” said owner, Molly Hakes. “We wanted to bring a taste of what we do, so these looks are edgier and youthful.” Kouture followed with a black and white feast for the eyes that included both tailored and relaxed looks. Hogan McLaughlin brought a sexy vibe that was all about structure. Dresses featured boning details, similar to corsets that followed the curves of the models’ bodies were on display. Zippers, high collars and stiff shoulders were all part of the first few looks, but they transitioned into satin, flowy dresses, showing McLaughlin’s range of ability as a designer. Manfredonia’s models entered the runway with minimal makeup and sleek hair, leaving a blank canvas for the gowns they wore. The eveningwear designs included lace detailing and sparkle to brighten the mood and prep the audience for Xuly Bët, a line of clothing by Malian fashion designer, Lamine Badian Kouyaté. Models slayed in body-hugging jumpsuits and dresses made of neon, animal print fabric, proving there are no true rules in fashion. Kouyaté ended the night by expanding our minds, encouraging us to express ourselves and truly opening our eyes. 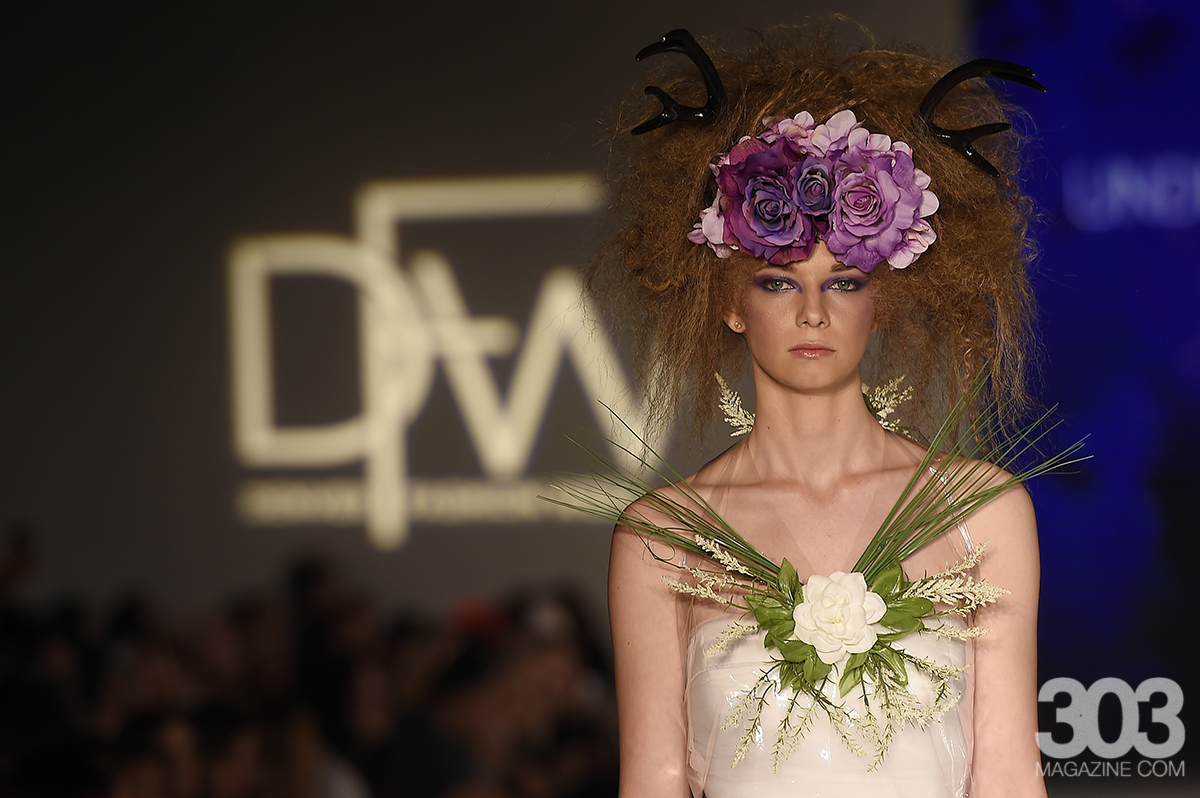 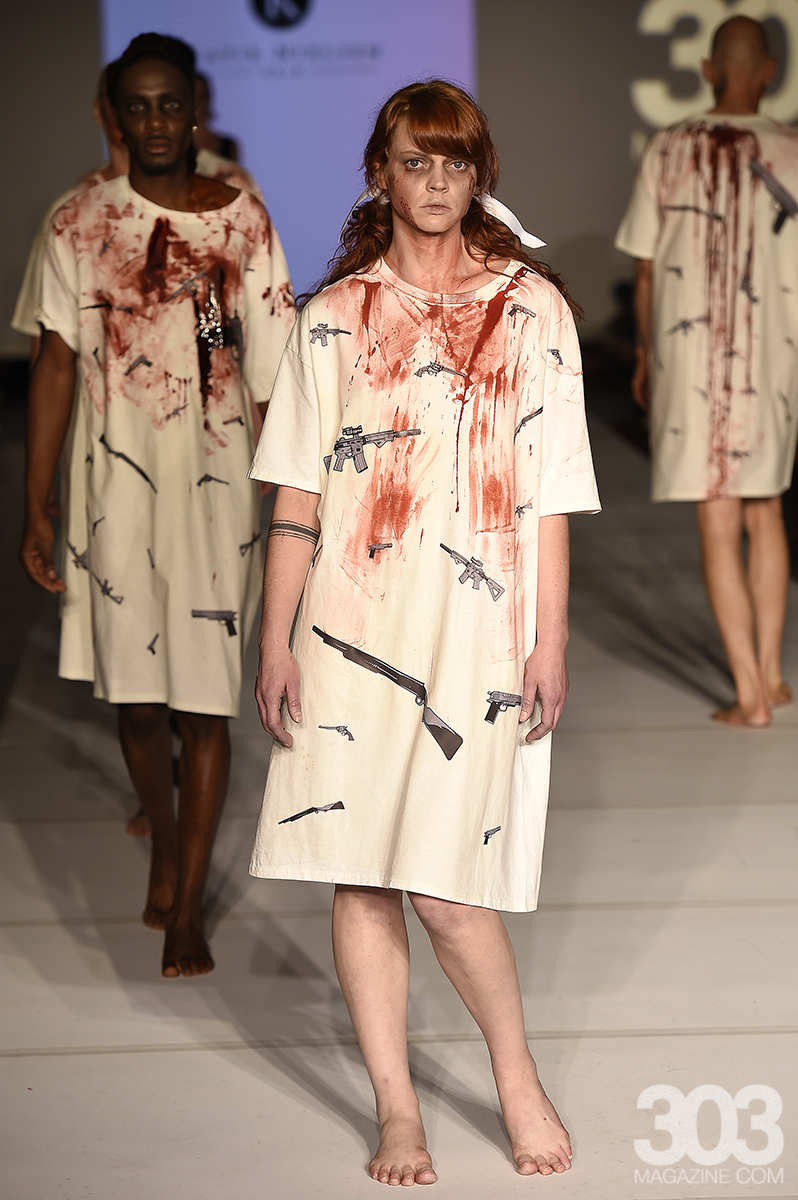 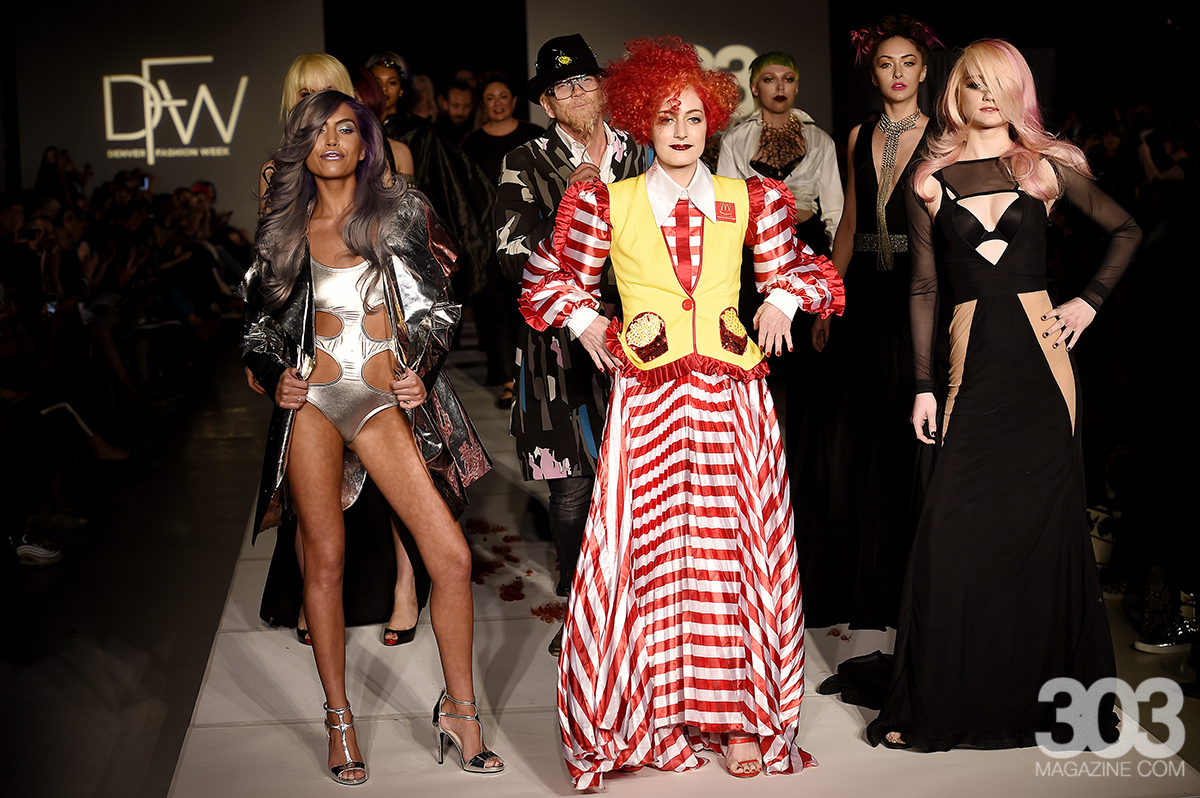 The Hair Show is clearly DFW’s most avant-garde attraction. Industry titan, Charlie Price, led us on a journey that both began and ended with delighted gasps, as we couldn’t believe what was happening before us. Vanity Dollz Studio began the show with an unapologetic tribute to hair. Models boldly claimed the catwalk in clear plastic garments and fishnet tights punctuated by the glow of tiny lights woven in. Each had a neon crop created with blunt, dramatic lines. It was the kind of severity that turns fashion shows into expressive displays of creativity more than pageantry. Beauty Underground artists followed with a tribute to Old Hollywood glamour. Models were transformed into movie stars with smooth waves, opaque sunglasses and simple, sophisticated attire. Halo Salon brought an entirely different show, with three seemingly preppy looks that married Ralph Lauren’s aesthetic and Tommy Hilfiger’s color palette with E. L. James’ Fifty Shades trilogy. Each model’s outfit was accented with BDSM accessories, truly showcasing the hair industry’s ability to bring different worlds together in a way that absolutely works.

The show also included a segment broken into two parts — Fire & Water and Flora & Fauna. Fire & Water included seven different salons, each providing three looks to go with the theme. Flora & Fauna combined talent from local designers with featured hair stylists. Hurst and Hailey Hodapp brought us mythical creatures, angelic and innocent in flowing white with antlers and horns covered in flowers. Topping and Hannah Werling took us to a wet landscape where lace dresses covered in clear plastic reigned. Not to be outdone, TIGI brought a whirlwind of black leather, red plaid and big afros, while Davines shocked us with holographic patterns painted into its hairstyles.

The DFW finale was one for the books. John Paul Mitchell Systems Global Artistic Director, Robert Cromeans, changed the runway into his own personal salon. As his assistants directed models to his chair, he wielded his clippers with expert form, actually cutting models’ hair on the catwalk. One by one, the women were transformed according to his impromptu vision. It may have been a moment in time, but it will go down in DFW history. It felt like the launching point into the new age of Denver style.

Go here to see more photos from the Hair Show.